Note: this is a translation with some re-writing of a previously published post: Le problème SAT.

I’m going to explain what the SAT problem is, because I’m going to talk about it a bit more soon. It’s one of the fundamental blocks around the P vs NP question; I’m going to write a blog post about NP-hard problems, but writing a post about SAT specifically is worth it. Also: I did my master thesis on SAT-related questions, so it’s a bit of a favorite topic of mine 🙂

SAT is a common abbreviation for “boolean satisfiability problem”. Everything revolves around the concept of boolean formulas, and a boolean formula can look like this:

Let me unpack this thing. The first concept is variables: here,

. They’re kind of like the “unknowns” of an equation: we want to find values for

. Moreover, we’re in a somewhat weird universe, the boolean universe: the only values

Then, we have some weird symbols.

means “and”. And the small bars above some of the letters indicate a negation. We combine these symbols with variables to get expressions, whose value can be computed as follow:

I’m summarizing all this in this table, for every possible value of

Boolean satisfiability in general is kind of “annoying” because it doesn’t have much structure to it: it’s hard to think about and it’s hard to say much about it, really. One thing that is always feasible, however, is to look at all the possibilities for all the variables, and see if there exists a combination of values that satisfies the formula. Picking one of the example above, and calling the formula

And let’s enumerate all possibilities: 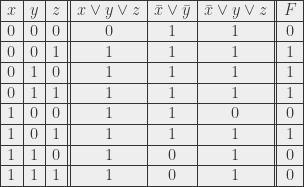 This table answers the question “is there values of

evaluates to 1 (the answer is yes) and it even goes further by giving said values (for instance,

are values that satisfy the formula).

lines, that starts to be annoying to do by hand. For 20 variables,

lines, the result is not necessarily instant anymore on a computer. And it continues growing: for

lines, which it grows faster and faster: the joys of power functions.

For the people who followed the previous explanations, this is NOT a polynomial time algorithm: it’s an exponential time algorithm. (Not even considering the fact that I’m only enumerating the possibilities and not evaluating the formula yet).

Since the general SAT problem seems fairly complicated to tackle, one can wonder if there are “subgroups” that are easy to solve, or that are easier to think about. And, indeed, there are such subgroups.

Suppose that, instead of getting an arbitrary combination of variables and symbols, I restrict myself of formulas such as this one:

. That’s a form where I have “groups” of variables linked by “

If I consider the “opposite” of the previous setup, with formulas such as

, we have “groups” of variables linked by

. This type of formulas are called CNF formulas (where CNF means “conjunctive normal form”). A CNF formula is defined as a set of clauses (the “groups”), all linked by

symbols (“and”). A clause is a set of one or several literals that are linked by

symbols (“or”). A literal is either a variable (for example

) or its negation (for example

The question asked by an instance of the SAT problem is “can I find values for all variables such that the whole formula evaluates to 1?”. If we restrict ourselves to CNF formulas (and call the restricted problem CNF-SAT), this means that we want that all the clauses evaluate to 1, because since they are linked by “and” in the formula, I need that all of its clauses evaluate to 1. And for each clause to have value 1, I need at least one of the literals to have value 1 in the clause (I want the first literal or the second literal or the third literal or… to be equal to 1). As previously mentioned: it can happen that all the literals are equal to 1 – the clause will still be equal to 1.

From a “complexity class” point of view, 3-SAT is in NP. If I’m given a satisfiable 3-CNF formula and values for all variables of the formula, I can check in polynomial time that it works: I can check that a formula is satisfiable if I have a proof of it. (This statement is also true for general SAT formulas.)

What we do not know, however, is whether 3-SAT is in P: we do not know if there exists a polynomial time algorithm that allows us to decide if a 3-CNF formula can be satisfied or not in the general case. The difficulty of the problem still does not presume of the difficulty of individual instances. In general, we do not know how to solve the 3-SAT problem; in practice, 3-SAT instances are solved every day.

We also do not know whether 3-SAT is outside of P: we do not know if we need an algorithm that is “more powerful” than a polynomial time algorithm to solve the problem in the general case. To answer that question (and to prove it) would actually allow to solve the P vs NP problem – but to explain that, I need to explain NP-hard problems, and that’s something for the next post, in which I’ll also explain why it’s pretty reasonable to restrict oneself to 3-SAT (instead of the general SAT problem) when it comes to studying the theory of satisfiability 🙂